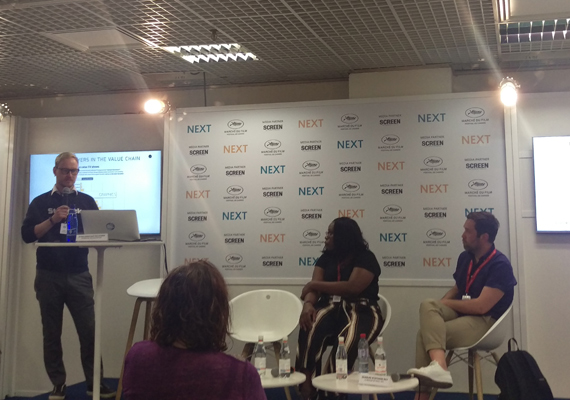 On the premises of the Cannes Film Market (8-17 May), the Estonian innovation and development incubator Storytek Accelerator had a chance to present its work to the audience of the tech-focused NEXT section (8-13 May).

The platform, which was officially launched in 2017 and has secured the support of Enterprise Estonia (EAS), Elisa and the Tallinn Black Nights Film Festival, is focusing on the challenges that the film industry increasingly faces, as Storytek’s CEO and founder, Sten-Kristian Saluveer, explained in his opening speech. Currently, the new business models “invite in” new players that no longer follow the traditional rules, such as Netflix, meaning that technology should also adapt and offer new applications to existing industry players. Using successful former financial start-ups such as TransferWise and Superangel as examples, Saluveer explained that the means used to combine film and technology are quite similar, and one of the Estonian success stories in this field is Digital Sputnik, which started creating high-quality, modular LED systems for cinema lighting.

The driving forces behind Storytek aim to bring together technology and creativity. The accelerator takes advantage of Estonian tech knowledge and the advantageous legal regulations in the country, which offer an excellent digital ecosystem for emerging companies to have a base in the EU and further develop their innovative projects. 75% of the incubation cost is currently covered by Storytek, leaving the participants to cover only 25% (roughly €2,000), which certainly adds value in this competitive market.

Earlier this year, the first Storytek cohort officially graduated, and two of the six graduates were also present in NEXT’s conference room. Victoria Thomas, of UK-based CUES, presented an analytics tool that connects films with the right audiences. Using a Tinder-like app, CUES matches the correct audience with the right trailers, and as the user “matches” with the right film, he will later be informed by the distributors and exhibitors about when it will be available in his region. The app has already secured the support of Creative Europe and won the Canon Innovation/Propellor Award at the Rotterdam Film Festival in 2017.

The other graduate was Charles-Stephane Roy, of Montreal-based La maison de prod, best known for producing The Ravenous, the Quebecois zombie film that was well received at Toronto last year. He presented VFC, a psychological drama that connects cinema and transmedia, and which is about melophobia – the fear of music. Its main innovation is in bringing brain-computer interface storytelling to the big screen by offering an interactive neurotech experience.

Crítica: My Dad Is a Sausage

Anouk Fortunier • Directora de My Dad Is a Sausage