Hackerville, the first HBO Europe co-production (with Germany’s TNT Serie), was released in Romania, on the giant’s HBO Go platform, last weekend. The story, which follows a German cyber-crime expert investigating a hacking attack in Romania, engrossingly – if rather clunkily – mixes action tropes with deeper, more relevant discussions on our relationship with the past and conflicting mentalities.

HBO dropped directing duties on the shoulders of Igor Cobileanski (who, besides his debut feature, Eastern Business [+lee también:
crítica
tráiler
ficha de la película], directed HBO’s Romanian show Shadows) and invited Anca-Miruna Lăzărescu (That Trip We Took with Dad [+lee también:
crítica
tráiler
entrevista: Anca Miruna Lazarescu
ficha de la película]), who has Romanian-German ancestry, to serve as a co-director. The show centres on Lisa Metz (played by Romanian-born German actress Anna Schumacher), a cyber-crime investigator who, following a cyberattack on a German bank, identifies the Romanian city of Timişoara as the base of the attacker. As she was born in Timişoara and speaks Romanian, she is sent to the country to investigate, crossing paths with local detective Adam Sandor (Andi Vasluianu), who is also investigating the shadowy internet-related deeds of a local gang.

Despite some clumsy writing and the use of two of its six episodes to attempt to set out some interesting and well-balanced pieces on a promising chessboard, Hackerville finally manages to do so. Lisa’s perspective on Romania and the menacing warning that her father (Ovidiu Schumacher) gives her on the eve of her departure (“Don’t trust anyone there”) are used as a backdrop to introduce the peculiarities of Romanian-German history within the story, as during the communist regime, many German ethnics were forced to leave or were even sold to Germany (an intriguing aspect of history explored in documentaries such as Răzvan Georgescu’s Trading Germans [+lee también:
crítica
ficha de la película]). It will soon become apparent that Lisa’s tragic memories of her life in Timişoara may hide even darker secrets...

At its lowest point, Hackerville may surprise the audience with its dubious decisions (an elite police team climbing two floors of stairs slowly enough to let an army of hackers wipe drives and flee?). Its strong point, meanwhile, resides somewhere beyond the main action and deals with memories and trust, how we manipulate – redact, even – the past and, more importantly, how we redact the present as we live it. Another interesting element of the story lies in the meaning of the word “hacking”, which doesn’t necessarily mean something bad, as is made clear by terms like black, white, or grey hacking.

Another strength of the show is its love story with the city of Timişoara, obvious from the eye-catching opening credits, in which various buildings continuously and seamlessly morph into the electronic components of a computer motherboard. The editing lingers on the many attractions of the city, making Hackerville a persistent ad for the beautiful Transylvanian city.

Hackerville was produced by HBO Europe in co-production with TNT Serie (Germany). HBO will broadcast the show in as many as 17 European countries (Hungary, the Czech Republic, Slovakia, Poland, Bulgaria, Slovenia, Croatia, Serbia, Montenegro, Macedonia, Bosnia and Herzegovina, Spain, Sweden, Norway, Denmark, and Finland, besides Romania), while TNT Serie will broadcast it in Germany, Austria and Switzerland. 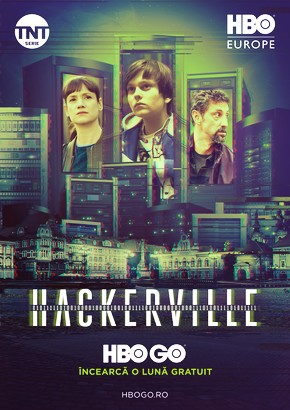 Crítica: I Am Not Alone

Crítica: Wait for Me