"Time is transient. We are eternal. Plucking seconds, one by one, arranging them like flowers, until one day we forget what for." Making her return with Yuni [+lee también:
tráiler
ficha de la película] (co-produced by France) in the Platform competition of the Toronto Film Festival, where she also presented her previous opus, The Seen and Unseen [+lee también:
crítica
tráiler
ficha de la película], in 2017, Indonesian filmmaker Kamila Andini demonstrates simplicity, tenderness and delicacy as she plunges into the wake of a modern 16-year-old teenager who is reaching a crossroads in her life. Entering into the zone of uncertainty, worry and discovery which often accompanies her age, Andini’s protagonist must also wrestle with the expectations of a highly traditional society when it comes to the place of women.

"You’ve grown up, you’re ready for marriage – You want me to accept it? – Marriage is a blessing, it’s not to be refused." Pretty-faced Yuni (Arawinda Kirana) is living with her grandmother while her parents work in the capital. In her final year of high school, she’s very much a young woman of her time, hanging out and still having fun, like a child, with her friends, inseparable from her mobile and in love with her literature teacher Mr. Damar (Dimas Aditya), albeit platonically. But the external and internal pressures on her are slowly but surely mounting.

At school, the Islamic club brings up a subject currently under discussion within the higher echelons of government: the prospect of compulsory virginity tests for all female high schoolers, on the pretext of preventing pregnancies among unmarried young women. For Yuni, who’s encouraged by Mrs. Lies (Marissa Anita), it’s also a question of knowing whether she’ll be able to continue her studies at university, which depends on her obtaining brilliant results, not to mention a study grant. But her main issue is the sudden flurry of marriage proposals coming her way, which seem to come out of nowhere: the young woman turns down the first, to everyone’s great surprise, given how well-trodden a path arranged marriage is for young Indonesians. But superstition is also playing on her mind, because refusing more than two proposals is said to bring bad luck… What does the future look like for Yuni? What does she really want? These are particularly difficult choices to make at an age where her many desires are still somewhat hazy, where a world breaking free from traditions lies waiting to be explored (alongside others’ bodies), and where she crosses paths with super timid high-schooler Yoga (Kevin Ardilova) who’s hopelessly in love with her…

By way of a seemingly simple, well-oiled story (based on a screenplay written by the director and Prima Rusdi), Yuni paints a highly empathic portrait which allows her to gradually unveil the full scale of the problematic situation for women in Indonesia (50 million rupees - roughly 3000 euros – are offered for Yuni’s dowry). But Kamila Andini’s real gift is her ability to maintain a gentle and harmonious approach, despite the potentially dramatic nature of the subject-matter. It’s a method which sees Andini imposing herself as a subtle filmmaker who understands the art involved in conveying a universal message, perfectly echoed by Sapardi Djoko Damono’s luminous poetry (taken from his collection entitled Pluie de juin) which lulls the viewer throughout the film. 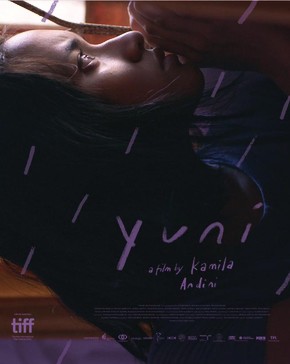