Born in Kiel in 1990, Dennis Stormer has always felt at home in the art world: as a member of a theatrical improvisation group, as a performer but also as an installation artist. After choosing Berlin as his adoptive city, the young German talent ventured further into the world of the seventh art as a film critic but also a director. Indeed, it was in the very same German capital that Stormer shot his first short films. Next, he studied film direction at Columbia University in New York and at the Filmakademie Baden-Württemberg, graduating in 2019. His first feature film Youth Topia [+lee también:
entrevista: Dennis Stormer, Marisa Meier
ficha de la película], which has been selected for the Zurich Film Festival’s Focus competition, was devised as a transmedia project about the frustration and nostalgia of adolescence, and brings about a surprising yet successful marriage between the mega technological world of web series and a fiction film narrative style.

The inhabitants of Valpolvra, the mysterious town acting as a setting for Stormer’s first film, are automatically directed towards their ideal job by way of an algorithm which spies on their everyday lives. Everyone seems to be living productive and rewarding lives, not questioning this strange and intrusive “big brother” presence. Hiding in the midst of this dangerously uniform and docile population is a micro-community whose members have decided to live outside of the rules. Wanja (played by the volcanic Lia Von Blarer) and her five life companions are described as eternal teenagers who will stop at nothing to defend their autonomy. Laying claim to an existence on the margins while renouncing a life where productivity is synonymous with maturity, our young renegades 2.0 publish meaningless, disruptive content on social media which allows them to escape the algorithm. But Wanja is nevertheless contacted by a superior entity who offers her an opportunity to become an adult. Following some initial hesitation which sees her frightened at the idea of betraying her companions, our flame-haired anti-heroine decides to accept the offer, giving up a carefreeness and freedom whose significance she probably hasn’t fully learned to appreciate. But her bright and immaculate office, the never-ending compliments from her superiors, her new designer apartment and the prospect of a stable and socially acceptable life all bring an unexpected side-helping of loneliness with them. Wanja grows increasingly aware of the sadness involved in her adult condition and the loss she feels for an innocent world where solidarity and a sense of belonging reigned supreme. “We’re ruining our future”, Wanja and her companions joke as they count their likes on their smartphones, as if wanting to remind us that the present moment is worth far more than a future where abandoning your identity and conforming to the masses are a must in order to succeed. But this vivacious gang have no intention of worrying about the future; on the contrary, all they’re interested in is having fun making a name for themselves. Free from all responsibility, this gregarious gang of outsiders live a life of eternal adolescence nestled within the reassuring walls of an abandoned farm located far from the city. Will the new life enjoyed by Wanja, who has been catapulted into adulthood after years of teenage carefreeness, be enough for her, or will nostalgia for a past existence full of sweet obliviousness drive her back home? Who said that growing up means conforming to a society where the ultimate goal is success and a pre-packaged state of “normality” which doesn’t tolerate difference? By way of Youth Topia, Dennis Stormer confronts us with the stereotypes associated with “becoming an adult”- a stable job, a heterosexual family and financial wellbeing – and shows us that an escape route is still a viable option. 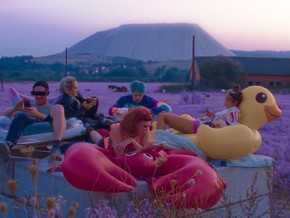