Crítica: Adolf Muschg - The Other

After embarking upon the reconstruction of Klaus Rósza’s personal story in 2016 (in Klaus Rózsa, Photographer) which saw him home in on the photographer and political activist born in Hungary but raised in Switzerland where he always fought to expose the injustices which also plagued his adopted homeland, Erich Schmid is now trying to capture the essence of one of the most influential Swiss intellectuals and writers of all time, after Max Frisch and Friedrich Dürrenmatt: Adolf Muschg.

Now an expert in the art of depicting unusual and courageous characters who knew how to look far beyond the banality of everyday life and who broke seemingly indestructible rules, Erich Schmid isn’t afraid to investigate the “sacred cows” of Switzerland’s artistic and cultural landscape. Before Adolf Muschg, it was Max Bill, the revolutionary architect, painter, designer and far, far more, who was scrutinised through the lens of Schmid’s camera, resulting in Max Bill – Das absolute Augenmass (2008). His curiosity and skill allow him to drill down into the minds of artists about whom we thought there was nothing left to learn.

Presented in a world premiere within the Zurich Film Festival’s Special Screenings section, Adolf Muschg - The Other is the product of extensive research on a writer whose difficult childhood helped to forge a free and rebellious personality, albeit always anchored within an institutional context which he knew how to mould to his own image and likeness. Before becoming the great writer and expert in oriental culture that he is, not to mention the influential political figure that we’re all familiar with, Adolf Muschg was a child left to his own devices by an elderly father who died when he was still very young and by a mother who suffered from severe depression, probably owing to the abuse she’d suffered as a child. Destiny decided that little Adolf (a name inherited from his father which often triggered understandable, instinctive hostility), who was caught between the conservatism of his bigoted father and the fragility of his mother who was only ever present when her son fell sick, would nonetheless find the strength to rebel. The straw which broke the camel’s back was an “initiation rite” which he was forced to undergo during a Nazi-esque boy scouts’ camping trip, whereby young Muschg was immersed into a bucket full of urine. From that point on, the Swiss writer and philosopher has ceaselessly examined the society around him and our relationship with “the other”, which leads us back to the deep and complex connection we develop with ourselves, in a society which is too often focused on egos and their superficial needs. After a stay at the infamous, evangelical Zollikon boarding school, where he witnessed totalitarianism and extreme levels of strictness which left him with deep and lasting wounds, Muschg studied German literature and psychology in Zurich and Cambridge. His career then saw him accepting a teaching post, first at the International Christian University in Tokyo, a city which deeply fascinated him and where he wrote his first novels which brought about his fame - Im Sommer des Hasen – and then at America’s world-renowned Cornell University. It was here that he experienced a political climate in ferment, a need for freedom, and a tendency to question the established order which would never subsequently leave him. Following his return to Switzerland, where he taught literature at ETH Zurich and founded the important, avant-gardist laboratory/think tank Collegium Helveticum, his rise to the Olympus of German-language world literature brought him to the Academy of Arts in Berlin, where he came to serve as president between 2003 and 2006. Choosing not to weigh the film down with an often-superfluous voice-over, Erich Schmid allows his character to express himself with the calmness and irony which make him unique, and which reveal previously undiscovered sides of Muschg. It’s a portrait of a man of his time, vested with all the privileges reserved for his sex, who knew how to drill down into humanity’s deeper recesses, without contenting himself, as so many others do, to unashamedly enjoy the comfort his position afforded him by rights as an educated, heterosexual white man. It’s now up to others to continue the debate on the pressing and topical matter of difference.

Adolf Muschg - The Other is produced by Ariadnefilm GmbH - who are also handling international sales - and SRF Schweizer Radio und Fernsehen/SRG SSR.

más sobre: Adolf Muschg - The Other

Crítica: Adolf Muschg - The Other 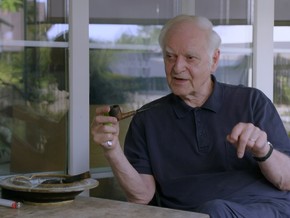