Los Angeles-based grunge musician-turned-vlogger Annie Hardy is some piece of work. If last year’s obligatory lockdowns felt like eerie first steps into a Mad Max future, Hardy is aboard the souped-up SUV roaming the new wastelands, freestyle-rapping and yelling out red-pilled conspiracy invective to passers-by, not to mention her loyal streaming followers who tend to peter out in the low double figures. Playing a heightened, pro-Trump version of her real self, in rising horror director Rob Savage’s effective new film, Dashcam [+lee también:
entrevista: Rob Savage
ficha de la película], she decides she’s had enough of “woke” and COVID-conscious LA, and flies across the pond to wreak havoc on London instead. As one does, when you’re a remote-working creative freelancer. This not-especially-scary, yet still striking, feature was premiered at TIFF, and has just had its domestic premiere at BFI London, where it received a more generous critical response.

Horror is typically given licence to be one of the more visually beautiful film genres, which is why the “found footage” sub-category has often seemed counter-intuitive, and almost an alibi for filmmakers to avoid working as hard. But as we move through the 2020s, many people tend to own at least two high-definition devices, some of which can capture video in 4K resolution and above, technically the same image quality as many Hollywood blockbusters. More than the majority of new films, Dashcam has the immediacy of a recently published tweet, and feels unusually plugged into the zeitgeist of how we – and especially younger people – consume images and information today: where big-mouthed shit-talkers like Annie have taken on the social role of broadcast news anchors, and Twitch.tv is the new CNN.

For Savage’s purposes (and isn’t “Savage” a good name for a horror auteur, like the “Brothers Grimm”), he devises a cinematic Mad Libs game where this very contemporary character is ambushed by a vengeful demon out of an occult ritual. The stream is “hacked”, and Annie becomes like a third-person video-game character facing a “final boss”. Once in London, she steals her ex-bandmate Stretch’s (Amar Chadha-Patel) car keys, and takes on a call from his side job as a delivery driver – as Annie’s livestream comment box would probably say, for the “lols”. At the decrepit kebab shop she arrives at, she finds it within herself to do a good deed: give the mysteriously ill Angela (Angela Enahoro) – who happens to be on the premises – a lift to A&E. When Angela begins barfing up putrid, yellow liquid, Annie begins a fateful, fatal tussle with her, cheered on by her stream’s steadily increasing follower count, captured in unbroken takes by the glitchy, unblinking dashcam.

Savage wants to cause his viewers a bit of pain and make his second feature an endurance test, in the most positive, cinematic sense of the term. The car, of course, gets upturned; the vehicle violently shakes – as does the affixed camera – so the audience is given a collective form of motion sickness. For all its image resolution, and low-light sensitivity, the dashcam’s lens is still fairly primitive, so objects at a distance induce us to squint. Are we watching an experimental film, the sort that plays in a smaller auditorium down the hall from the genre flicks at film festivals? Savage’s intelligence and self-awareness – after Host [+lee también:
crítica
tráiler
ficha de la película]’s Zoom seance – with these pervasive video apps suggest we just might be.

Dashcam is a UK-US production by Blumhouse Productions and Shadowhouse Films. 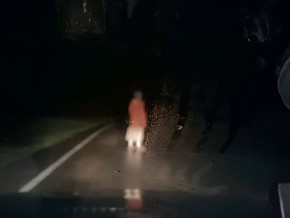