The four books in the series published between 1949 and 1959 are considered Swedish literature classics, telling the story of a Swedish family at the forefront of a wave of Scandinavians who crossed the Atlantic in the middle of the 19th Century, with the promise of free land in Minnesota to build property and a booming economy.

In 1971 and 1972, director Jan Troell adapted the four tomes into two acclaimed movies starring Max Von Sydow and Liv Ullmann. Upon its Swedish release, most reviews did a side-by-side comparison between the 1971 film and Poppe's version, leaving some observers (unfairly from a critic's perspective) wondering which text they were reviewing. In Sweden at least, the original film is so revered that the Norwegian director was on a hiding to nothing.

Not one to be put off by making cinematic comparisons (after all, that's the bread and butter of critics, and for this record this reviewer has not seen Troell's films), Poppe's cinema at times threatens to veer into Terrence Malick territory with the way cinematographer John Christian Rosenlund shoots nature, with a sequence showing its wonders before a sex scene, and a voiceover used to give access to the thoughts of Kristina. Avoiding parody, Poppe always manages to stop himself from going full Malick in what is a sensitive and stimulating adaptation of the first novel. However, the voiceover does sometimes grate as it feels like a clunky way to direct the audience to think about specific themes.

At the heart of the film is a central performance of some magnitude by Lisa Carlehed. She plays Kristina as someone open to the world's lessons. A resilient character she doesn't want to go to America until one of her four children unexpectedly dies. She is stubbornly Lutheran, until the demands of the cloth create a rift in her friendship with Ulrika (Tove Lo), a prostitute she meets on the boat, argues with and hates before befriending. Their relationship is the most important in the film, not the one with her husband Karl-Oscar (Gustaf Skarsgård), which is quite a departure from the books, and might grate some. With Kristina's acceptance of their friendship and her turning her back on the church, Poppe conveys the idea of America as a melting pot. This is an America where people get judged as individuals rather than for their groups.

Poppe displays his usual technical prowess. The film starts in black and white with the family leaving on horse and cart, and as the backstory of the family is revealed and the trip to America begins, the images slowly turn into colour. America is shown as a harsh place, where the rift with Native Americans has divided the land, the public sphere is full of dangerous scheming men, and respectable women's lives are spent at home. By concentrating on Kristina rather than following her husband into town, Poppe focuses on the emotional turmoil of moving to another country. So, we don't see scenes of families building houses, which Malick would have delighted in, nor the altercations in the nearby town, but shots of the couple swimming and bathing each other, finding solace in each other's friendships and a mother willing to rise to a challenge of leaving her life and religion behind despite all the dangers.

Crítica: The Killing of a Journalist 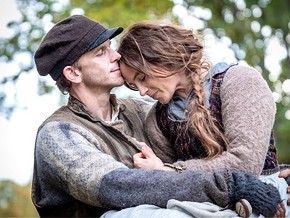