Crítica: Talking About the Weather

Clara is nearing forty. An assistant at the University of Berlin, she is working towards a PhD in philosophy. She leads a bohemian life in a roomy, shared apartment in Kreuzberg. Clara finds herself up against an overwhelmingly male environment, where being a woman is yet another obstacle to overcome on an already arduous road.

None of this is helped by the fact that Clara is also having doubts over her personal life. As the mother of a 15-year-old teenager who lives with his dad, she worries about their relationship and notably their communication issues, which remind her of own relationship with her mother.

On the occasion of the latter’s 60th birthday, Clara returns to the region of her birth in former East Germany. It’s a journey into another world, a provincial world, but it’s also a journey back in time. Because the ghosts of her past - an old uncle, a female cousin and her first love - soon come back to life, forcing her to face up to the road she has taken, the girl she once was, and the woman she has become.

Unfolding across two time periods, two distinct movements which nonetheless resonate with one another, Annika Pinske’s first feature Talking About the Weather [+lee también:
tráiler
entrevista: Annika Pinske
ficha de la película] - which was unveiled in the Berlinale’s Panorama section back in February and screened this week in the Brussels International Film Festival’s Directors’ Week - employs wondrous subtlety to explore the way in which sexism and classism are the bedrock of our societies, as it follows a woman who escapes her social class but is brought back down again and confronted with her gender and her origins, within both professional and family contexts.

Although the first half of the film initially points towards a light-hearted university film, certain remarks gradually steer the tale elsewhere, lending it an incredibly modern air and shining a light on situations rather than imposing words. Not only does Clara not belong to the right sex, but she also doesn’t descend from the right lineage either. She soon begins to feel uneasy.

But getting back to her roots is hardly the answer to all her questions. Clara acknowledges how far she has come, but she also suffers from a lack of communication: with members of her distant family whose attitude towards the world she doesn’t understand, or no longer understands, but also vis-à-vis her mother who does her best to avoid deep discussions of all kinds. But when all is said and done, do we ever really talk about anything other than the weather? Do we share what actually matters to us: our fears, our dreams, our emotions or our feelings?

In just a few scenes, Annika Pinske manages to pinpoint this malaise, this feeling of no longer being here, but of not being anywhere else either, of knowing that she did well to climb the social ladder but still wondering if she’ll ever reach the highest rung.

These questions are carried from start to finish by actress Anne Schäfer, who’s a familiar face on German TV and has bagged herself a wonderful, first big film role.

Talking About the Weather is a graduate film, produced by the German Film and Television Academy Berlin alongside New Matter Films and the director’s own outfit Pennybooth Productions. International sales fall to Films Boutique.

más sobre: Talking about the Weather

Crítica: Talking About the Weather

Crítica: Matter Out of Place

Crítica: Sermon to the Fish 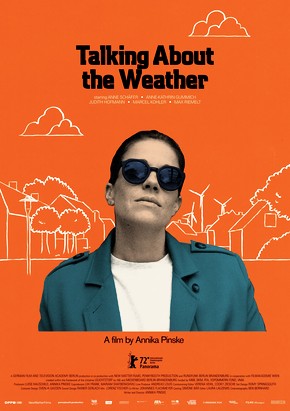 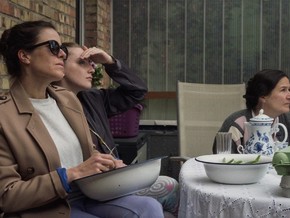 Crítica: Matter Out of Place

Crítica: Sermon to the Fish