Presented in a world premiere within the Zurich Film Festival’s International Competition, The Cake Dynasty [+lee también:
tráiler
entrevista: Christian Lollike
ficha de la película] confirms multi-award-winning Danish dramatist Christian Lollike’s predilection for topical themes and political overtones. His first fiction feature is shot through with a multitude of “uncomfortable” subjects: fatphobia and sugar addiction, immigration and the coexistence of different cultures, and mental illness and freedom of worship, which don’t always rub along too well. Determined to investigate each and every one of these themes to their extreme limits and unperturbed by taboos, Christian Lollike has launched himself into an incredibly risky endeavour. 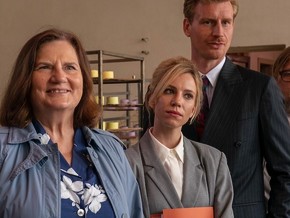