Maidan chronicles the civil uprising against the regime of president Yanukovych that took place in Kiev in the winter of 2013/14. The film follows the progress of the revolution: from peaceful rallies, half a million strong, in the Maidan square, to the bloody street battles between protestors and riot police. Maidan is a portrait of an awakening nation, rediscovering its identity.

Films about Stalin, Gorbachev and the Romanian Revolution will be in the spotlight at the impending documentary festival

VENICE 2018: In his third feature this year, Sergei Loznitsa returns to working with archive material, utilising it as an indirect commentary on political prisoners in Russia

The director’s new film, produced by Germany, France, Ukraine, the Netherlands and Romania, will be sold by Pyramide

Sergei Loznitsa, Peter Strickland and veteran make-up artist Colin Arthur are among the guest speakers at this year’s event

VENICE 2015: After Maidan, Sergei Loznitsa travels to the Lido with a new documentary using footage, this time about the dissolution of the USSR

Winter on Fire: Chronicle of a moral victory foretold

VENICE 2015: Evgeny Afineevsky has world-premiered a highly detailed and militant documentary on the 93 days of the Euromaidan, seen from inside the barricades

“Documentary is the spearhead of cinema”

Astra Film Festival’s president, Dumitru Budrala, chatted to Cineuropa about the challenges of organising the gathering and his future plans

The Way Out triumphs at CinÉast Film Festival Luxembourg 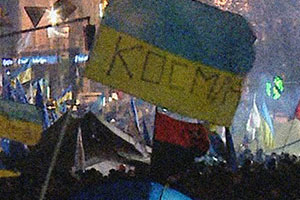