Lotfi, a fortysomething Tunisian immigrant, leads the life of a small-time thug in the Noailles neighbourhood of Marseille. His daily life is occupied by his home-appliance store and Monique, his French girlfriend, but the past catches up with him when his brother calls from Tunisia to inform him that his wife has had a stroke. Now, Lotfi has to go back home to reclaim custody of his nine-year-old autistic son, Amr, whom he has not seen for six years. Thus begins a journey where Lotfi will face his son, who completely ignores the father he has never known. It is Amr’s avoidance of eye contact that drives Lotfi’s quest to connect with his son and open him up to the world.

more about: Look at Me

Review: Look at Me

TORONTO 2018: Tunisian filmmaker Nejib Belkadhi directs a family drama about the process of rebuilding a relationship between a father and his autistic son

Watch on Cineuropa: A brave new world - Films championing diversity, migration and new ways of being

New indie gems for you to enjoy on our pages: fasten your seatbelts, and join us in these cinematic journeys!

The French company will be touching down at Cannes to sell the film by Kenyan director Wanuri Kahiu, co-produced by Europe and due to be unveiled in the Un Certain Regard section 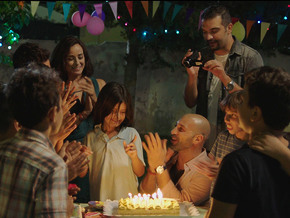