The Kiev Trial, also known as the ‘Kiev Nuremberg’, took place in January of 1946 in the Soviet Union, and was one of the first post-war trials convicting German Nazis and their collaborators. 15 criminals, guilty of atrocities, which were later identified by the Nuremberg trials as “crimes against humanity”, faced justice in case No.1679 “On the atrocities committed by fascist invaders on the territory of the Ukrainian SSR.” Using unique, previously unseen, archive footage, Sergei Loznitsa reconstructs key moments of the proceedings, including statements of the defendants and testimonies of the witnesses, survivors of Auschwitz and Babi Yar among them. The film lays bare the ‘banality of evil’ and is devastatingly relevant today, as Ukrainian people are once again being subjected to the violence of barbarian invaders.

more about: The Kiev Trial

“After some stories, you cannot listen to others any more”

VENICE 2022: Diving back into the footage first presented in Babi Yar. Context, the director showcases another moving documentary about Nazi atrocities in his native Ukraine

The festival and the documentary market will be held in the town of Guía de Isora in Tenerife until 4 February, showcasing 24 international projects in its industry section

Five Italian films and five French titles are in competition at the festival directed by Alberto Barbera, which will take place from 31 August to 10 September on the Lido 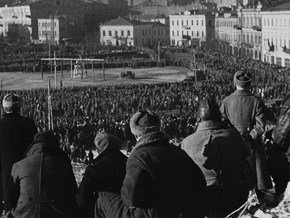