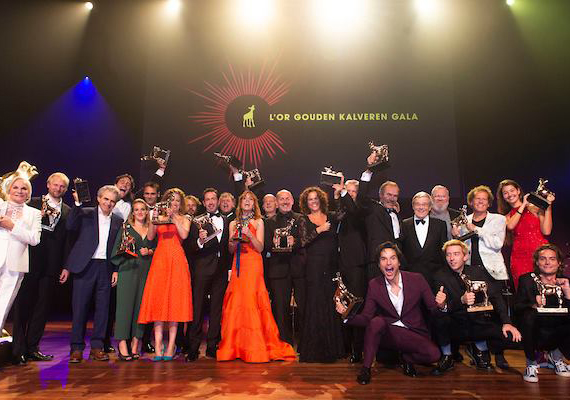 Set against the backdrop of Utrecht's charming city centre, the 38th edition of the Netherlands Film Festival took place between 27 September and 5 October. Traditionally, the festival draws to a close with the Golden Calves Gala. During this highlight, the Golden Calves, the Dutch equivalent of the Oscars, are awarded to the finest productions of the year. With a record 12 nominations, Joram Lürsen's heroic war drama The Resistance Banker [+lire aussi :
bande-annonce
fiche film] swept up a total of five Golden Calves this year.

The Resistance Banker is a drama based on a true story and set in Nazi-occupied Amsterdam. The unsung heroes of the Dutch resistance, Walraven and Gijs van Hall, risk their own lives to finance underground operations against the occupiers. The Golden Calf for Best Feature Film was awarded by Aad van Hall, the living son of real-life banker Walraven van Hall. “Under the watchful eye of the family, they've managed to create a beautiful film without deviating too much from actual events,” van Hall said with pride. The film is also the Dutch entry for the Best Foreign-language Film category at the upcoming Academy Awards.

The cast and crew went on a spree, coming out on top in the categories of Best Production Design (Harry Amerlaan), Best Female Supporting Role (Fockeline Ouwerkerk), Best Actor (Jacob Derwig) and Best Feature Film. The fifth Golden Calf that the movie earned was the coveted Audience Award, and it has the figures to prove it. With the counter exceeding 400,000 cinemagoers since its release back in March, The Resistance Banker is among the most-visited films of the year, which automatically nominates it for the award. This Golden Calf includes an Abraham Tuschinski Fund contribution of €30,000 to be taken home by producer NL Film & TV, and to be spent on a forthcoming Dutch production.

The runner-up, with three Golden Calves, was In Blue [+lire aussi :
bande-annonce
fiche film] – namely, in the categories of Best Director (Jaap van Heusden), Best Actress (Maria Kraakman) and Best Screenplay (Jaap van Heusden and Jan Willem den Bok). In Blue tells the story of a Dutch flight attendant who gets involved in a complicated and ambiguous relationship with a street kid living in the Bucharest underground.

This year’s Golden Calves were partly awarded by selected juries. The jury for Best Short Documentary consisted of filmmakers Digna Sinke and Thomas Vroege, and editor Gys Zevenbergen. Writer-director Erik van Schaaik and directors Sacha Polak and Nouchka van Brakel made the call for Best Short Film and Best TV Drama. Best Interactive was decided on by Martijn de Waal, Sjef van Gaalen and Klasien van de Zandschulp. The other awards were decided upon using the Academy model, which is comparable to the US Oscars and the British BAFTAs. According to this system, which was implemented in 2015, former winners of the Golden Calves and other highly respected awards cast their vote.

To watch the awards ceremony in full, please click here.

Below are all the winners of the 38th edition of the Netherlands Film Festival:

Critique : The Case You

Critique : Fox in a Hole