It’s one thing to be passionate about shaking up the people in the corridors of power and challenging the antiquated norms of society, while quite another one is having to deal with your own dad for the last 28 years of your life and which gender she truly feels at home with. These very issues are vented in Mårten Klingberg’s My Father Marianne [+lire aussi :
bande-annonce
interview : Mårten Klingberg
fiche film], a topical Swedish comedy-drama, world-premiering as the closing film of this year’s Göteborg Film Festival.

Eager reporter Hanna (Hedda Stiernstedt), a woke would-be warrior fresh out of uni and striving for social justice, is having zero success in convincing the top Stockholm editors of her plans to give them a place in journalism history (“We’re kind of already there,” informs one of them drily). Insult to injury is added by her soon-to-be ex-boyfriend, caught humping away as Hanna returns a little too early from yet another futile job interview. She reluctantly opts to return to her little hometown of quaint Alingsås, where her school girlfriends, all of them married young mothers by now, snidely enquire about the conquests of the returning heroine. At least her family awaits her with open arms – dependable Daddy Lasse (Rolf Lassgård), the well-loved local vicar; solid Mummy Eva (Lena Endre); and brother David, annoying as hell but still brother David (Klas Wiljergård). She even lands a job as a temp reporter at the local TV station.

But as things are finally looking up, she detects some unrest on the home front. Her mum is slightly less solid, and her dependable dad acts downright strange at times, not least when it comes to some ladies’ garments turning up around the house. During an argument between her parents, Hanna overhears the name Marianne. A mistress, shock, horror? But no, it turns out that Marianne is none other than Lasse, and that Lasse, Hanna’s safe haven in this turbulent existence, is about to make the leap to womanhood…

Based on author-journalist Ester Roxberg’s autobiographical novel My Father Ann-Christine. The Memory of a Secret, the adapters of My Father Marianne have made considerable alterations (including changing the names of all involved) in favour of a lighter, more sanitised take, adding comic relief and emphasising cosy snugness at the expense of more complex ventures. A missed opportunity, it could be argued, at least in regard to the fine cast that could certainly have taken some darker paths. Endre has some poignant scenes, and of course there’s Lassgård in the title role, pushing his bearlike masculinity over the edge in a tastefully underplayed performance. Stiernstedt is perky as young Hanna, and steady-handed director Mårten Klingberg (Beck, Cockpit [+lire aussi :
bande-annonce
fiche film]) keeps up a cheerful pace and an amiable tone. All things considered, it’s not an unlikely contender to be this year’s A Man Called Ove [+lire aussi :
bande-annonce
fiche film] at the Swedish box office, while the international splash may be more discreet this time around.

My Father Marianne was produced by Sweden’s Avanti Film, with international sales by TrustNordisk.

plus sur : My Father Marianne

Critique : Nobody Sleeps in the Woods Tonight 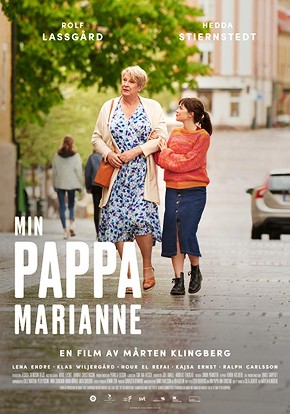 Critique : Nobody Sleeps in the Woods Tonight