The threat to planet Earth no longer comes from aliens, but from the planet itself, or rather from man. The Norwegian disaster film The North Sea [+lire aussi :
bande-annonce
fiche film], directed by John Andreas Andersen (The Quake [+lire aussi :
bande-annonce
fiche film]) and presented as a world premiere at the 16th Rome Film Festival, imagines a much more disturbing threat to mankind, because it is more credible and topical than those that have fuelled so many disaster films in recent decades, such as the invasion of strange creatures from space or killer asteroids headed for Earth. The threat here comes from the bottom of the sea, where the massive and continuous extraction of oil and gas has turned the ocean floor into a 'Swiss cheese,' ready to collapse and swallow up the oil platforms, with subsequent spillage of unimaginable quantities of oil into the water. In other words, an environmental disaster with dramatic consequences for the coastline, the economy, the fauna and the livability of this planet: in short, the end of the world.

It all happened in the North Sea, where one of the world's largest oil fields, Ekofisk, was discovered in 1969, launching a season of offshore drilling, resource exploitation and prosperity. Fifty years later, the environmental bill arrived: a crack opened on the ocean floor, causing a platform to collapse. A team of experts, including submarine robot operator Sofia (Kristine Kujath Thorp), rushes in to search for the missing and assess the damage, but what they discover is that this is only the beginning of a possible apocalyptic catastrophe. Hundreds of rigs are evacuated, but during the evacuation operation there is a problem, and Stian (Henrik Bjelland), Sofia's loving companion, becomes trapped in the depths of the sea. No one is willing to go and rescue him, it is too risky, events are coming to a head. The one who won't give up is, of course, Sofia.

"There are no superheroes here, but normal people who react and make decisions," said the director when presenting the film in Rome. And in the film, the one who always knows what to do is Sofia, a sweet and wise girl who, when necessary, shows the courage of a lion. Suspense, good feelings, races against time, situations that are resolved in the nick of time, and above all grandiose special effects that have nothing to envy from Hollywood productions, there is nothing missing to satisfy lovers of the genre, all declined in the Scandinavian style, where the debate on oil policies is in fact very heartfelt and where the question is whether it is appropriate to continue digging in the seabed to obtain energy. "We thought we were a nation founded on oil, instead we are a nation founded on the ocean," the film says, summarising the concept that nature still has the last word, or at least it should. The North Sea is therefore a film that entertains, but also makes us think a lot, since certain images, rather than from a disaster film, could come out of a normal news programme today.

The North Sea is produced by Fantefilm and distributed by Nordisk Film Distribusjon AS. It is scheduled for release in Norway on 29 October; in Italy, it will be released in April 2022 by Minerva Pictures.

plus sur : The North Sea

TrustNordisk propose Another Round à Cannes 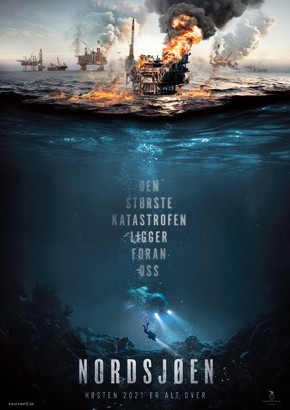