There is no denying that the discovery of hundreds of reels of never-before-seen footage shot by the personal cameraman of Yugoslav president Tito is exciting. A quote from Walter Benjamin opens Mila Turajlić’s film, Non-Aligned: Scenes from the Labudović Reels [+lire aussi :
critique
fiche film], which premiered at IDFA: “History decays into images, not into stories.” The images of the war have left a seemingly indelible mark, but what about the images from before? Yugoslavia was not only a country that collapsed; it was first of all a unique political project, and one that not only worked but inspired many others during several years. This unearthed footage offers a chance to remember that and to put this country, which no longer exists, back on the map.

Non-Aligned is the second half of Turajlić’s diptych based on the films of cameraman Stevan Labudović (the other film being Ciné-Guerrillas: Scenes from the Labudović Reels [+lire aussi :
critique
fiche film]), and tells a more wide-ranging story using the discovered footage. Its first half focuses more on Stevan Labudović himself, his journey and his memories of specific events, chief among them the First Summit of the Non-Aligned Movement, which took place in Belgrade in September 1961. Bringing together, around Tito, other leaders who did not want to align themselves either with America or with Russia, the event had obvious symbolic power, and watching those images is rather moving for the way they suggest that there once was if not the possibility, then at least the stated desire to find another way to co-exist. Many of the countries represented were created in the aftermath of decolonisation and newly independent, and the focus of the speeches uttered by all the various leaders is precisely the idea that all present parties want to work together to preserve each other’s hard-won freedom.

Turajlić, however, seems torn about what to do with all of this footage, for the film lacks focus and frequently seems to follow a rather contrived structure that isn’t all that enlightening. The idea that Labudović was not simply reporting facts, but constructing propaganda material, for example, seems rather clear from the start: he was not a journalist, but a hired cameraman. Similarly, that the event itself was most of all about showing an image of unity to the rest of the world, and to aligned countries in particular, is far from groundbreaking. The film, however, makes these statements turning points in its structure and in the narration, which itself seems torn between Turajlić’s own personal reckoning with what those images mean to her, and what their significance might be on a bigger historical scale.

Going hand in hand with this sense of a forced construction is the film’s fetishisation of the mechanisms of filmmaking and archiving themselves — the reels, the machines to play them, the process of syncing sound and image. These bring up interesting points — for example, Labudović’s camera did not necessarily record sound during the Summit, because what was actually being said was less important than the fact that these people were talking at all — but those are never built upon to create an actual thesis, beyond that which is already evident from simply reading about the event. These images, forgotten for decades, do not seem to hide many secrets. The fact that Yugoslavia was involved in helping Algerian independence fighters, and that Labudović himself helped them by filming propaganda footage, are clumsily framed like surprises in the narrative — only for the film to then reveal that Labudović, far from forgotten, is immortalised in a painting in an Algerian museum.

Despite this abundance of source material, Non-Aligned ends up feeling constrained and vague. Never fully successful in resurrecting the mood and stakes of a forgotten era, it also does not always convincingly make the case for why it would be interesting to do so.

Non-Aligned: Scenes from the Labudović Reels was produced by Poppy Pictures (Serbia) and Survivance (France).

plus sur : Non-Aligned: Scenes from the Labudović Reels 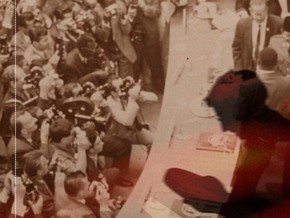