“I’m not fighting with you. I’m fighting FOR you,” the European Commission’s Andrus Ansip assured a room full of industry stakeholders at the Danish Film Institute on 16 September 2016.

Ansip’s visit to Copenhagen took place just two days after the Commission unveiled its proposals on the modernisation of copyright, one of the key initiatives of its Digital Single Market (DSM) strategy. The strategy, which was launched in May 2015, also covers actions already in progress. These include the proposed cross-border portability of online content and the revision of the Audiovisual Media Services Directive.

“The main goal for this European Commission is to provide better access to digital content for our people,” Ansip declared. He emphasised that the Commission wants to provide fair remuneration to creators, not free access to digital content. As he pointed out, European citizens are already circumventing copyright restrictions by using VPN or illegal downloading to access European films online.

“Piracy is a headache,” Ansip stressed. In his view, the only solution is to simplify licensing and provide legal access to digital content.

Klaus Hansen, CEO of the Danish Producers’ Association, acknowledged the piracy problem, but asked for enforcement tools instead of an open market. Several stakeholders shared the commissioner’s views of the opportunities and challenges offered by digital technologies. At the same time, they also voiced their concern over the instruments pursued by the Commission and insisted on market-led solutions. 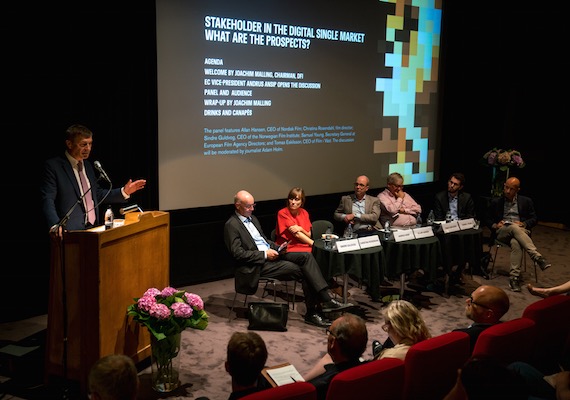 The European film model is often described as “complex” and “fragile”, since it depends on both public and private sources. As the panellists made clear, cross-border access to films online could undermine their ability to negotiate exclusive film licenses with local distributors on a territorial basis.

Such pre-sales make up a substantial part of European film budgets and are important not only for financing but also for promotion. The erosion of territorial exclusivity would also empower overseas OTT (Over-the-Top) services such as Netflix, HBO, and Amazon.

As Allan Mathson Hansen from Nordisk Film argued: “And we’re already dealing with them today, so we know what they will pay for our content, and we know how they will exploit it.” Hansen and his fellow panellists warned that moving towards a Digital Single Market too fast would disrupt the production of films with artistic edge, unconventional stories, and national uniqueness.

Film director Christina Rosendahl offered a personal example of how she relies on territorial restrictions in copyright: “In December, when my union, the Association of Film Directors, pays out rights payments for all the use of my films on TV, streaming sites, and cinema, I buy Christmas presents for my family and pay my debt to the bank.” Rosendahl went on: “If you want me to create unique films that touch your heart, make you laugh, and give you new incredible perspectives, I need to be able to work very hard and be able to pay for my daily expenses.”

The clash between copyright and competition law

Of particular concern in the recent copyright proposal is the part saying exercises of the contractual freedom to limit the exploitation of rights have to comply with EU law. According to Samuel Young from EFADs, this suggests the larger context of what is happening in terms of competition law at EU level: “Here, we see some kind of very aggressive implementation of competition law by DG Competition, as well as the investigation into pay TV, and the potential precedent that this could set for wider discussions about including contractual clauses.”

This obstructs the ability to have contractual clauses, which then completely undermines exclusivity, Young argued. He received support from legal advisor Charlotte Lund Thomsen in the audience. She remarked that this could weaken the producer’s negotiation position: “Exclusivity is like being pregnant: Either you are, or you are not. You cannot sell 50 percent exclusivity and expect to get the same money in return.”

Ansip was not ready to talk about competition cases. As he said: “Margrethe Vestager [European Commissioner for Competition] from Denmark is responsible for those issues, and I think you will have a lot of opportunities to discuss those issues with her.”

This brought some comfort to the worried industry reps. “I was very happy that you specifically declared that you will maintain territoriality. That’s a very important message to everybody here,” Joachim Malling said and urged Ansip and his fellow commissioners to “hurry slowly” with their plans.

The commissioner guaranteed there would be no rapid solutions. “We have to take time for democracy,” he said. 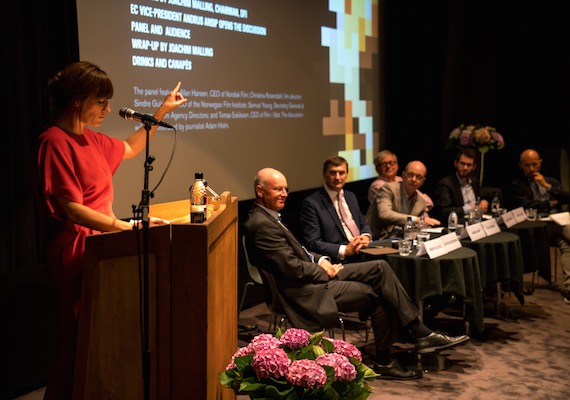 Nina Vindum Rasmussen is a recent graduate in Film and Media Studies at University of Copenhagen. Her master thesis is titled ‘EUtopia or Dystopia: European Films in a Digital Single Market’. This report was published in MeCETES.