Mubi is a specialist subscription VoD platform provider with a global presence in international markets, and is now trying to break in to the distribution business. What is their business model? How do they differentiate themselves from Netflix, Amazon Video and locally orientated specialist platforms? And why are they moving into distribution?

Mubi started in 2007 as an information-sharing platform that introduced quality auteur films to an online audience of cinephiles. From the very beginning, they acknowledged the importance of building a global film community: they created an online film database to which followers from international countries could contribute with ratings, reviews and self-produced lists or charts; and they created an online blog to report on films shown at international festivals.

They also established collaborations with film organisations such as The Criterion Collection and the World Cinema Foundation to underline their commitment to the preservation of world cinema. 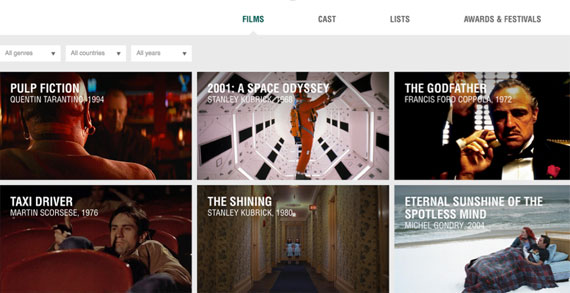 Mubi’s focus on promoting film culture through user engagement and social networking was critical to establishing initial growth. Having developed a modest but still global film community, their business activity expanded in 2010 as they established a VoD platform which included large film collections for transactional VoD (TVoD) viewing and for subscription VoD (SVoD) viewing.

While these different forms of VoD viewing potentially allowed audiences to access thousands of films, initial viewing numbers were very disappointing and the financial model was not sustainable, not least since the SVoD model required substantial financial investment to be able to acquire a large number of films. The company therefore decided to re-organise their offer and develop a new VoD viewing model. The founder and managing director of Mubi, Efe Cakarel, recalls: “In the beginning, we wanted to be like Netflix, but the unit economies of an ‘all-you-can-eat’ site is [sic] very capital intensive. ... The question becomes, how do you create a compelling experience? If you can’t get 10,000 titles, how about a limited selection?” (Kenny, 2017)

Mubi introduced their innovative new SVoD viewing model in 2012. This model involves making a small selection of 30 films available at any one time, with the list changing continuously, and each film being shown for a limited period of just 30 days: every day, a new film on the platform takes the place of another.

At odds with the online logic of providing unlimited access to large collections of films, the model is based on scarcity of content rather than abundance; and the programming of films is based on the taste judgements of expert curators rather than the calculative predictions of algorithmic information technologies.

Kenny (2017) compares their model with the repertory approach to film programming by specialist cinema exhibitors. Thus the 30-day online window is the equivalent of a limited run in the theatrical market, but new films are always part of a repertoire that includes vintage films, world cinema films, and themed programmes paying homage to filmmakers. Indeed, on their website, Mubi describe themselves as “a curated online cinema bringing you cult, classic, independent, and award-winning movies” (my emphasis).

This involves new films and documentaries such as The Park [+leggi anche:
recensione
trailer
scheda film] (Damien Manivel, 2016) and Between Fences [+leggi anche:
recensione
trailer
scheda film] (Avi Mograbi, 2016) alongside vintage films such as The Break Up (Claude Chabrol, 1970) and Juliet of the Spirits (Federico Fellini, 1965), more recent world cinema such as Storm Children, Book One (Lav Diaz, 2014) and Battle Royale (Kinji Fukasaku, 2000), and themed programmes of films by directors such as Frank Capra and Jaime Rosales.

As such, their curator function as cultural gatekeeper and the focus on exclusivity over open access bears resemblance with specialised locally orientated platforms, such as BFI Player and Curzon Home in the UK film market, and the specialised audiences they cater for.

The promotion of the Mubi viewing platform

In terms of acquisition of films, Mubi’s search and selection process is flexible and acquisition requires negotiating one-off short-term deals, providing a cost-effective advantage. Because the distribution rights of those films are not always available for all international territories, the collection of films showcased on their platform is different in each country. Other global VoD platform providers such as Netflix and Amazon Video are equally confronted with such distribution territory restrictions which impact on the availability of films.

With close to 30,000 paid subscribers in the UK and 100,000 paid subscribers internationally, Mubi is developing new strategies to establish further growth and enhance their SVoD collection. Like Netflix and Amazon Studios, they are now getting involved in the wider business of distribution beyond their own online viewing platform, and increasingly operate as an ‘all-rights’ film distributor to be able to exercise more control over distribution and develop release strategies for films across different distribution windows (cinemas, online, physical discs, television, etc).

The release of the Portuguese trilogy Arabian Nights [+leggi anche:
recensione
trailer
intervista: Miguel Gomes
scheda film] (2015) marked the beginning of Mubi’s ambition to operate as a distributor in the UK market and occasionally in the US market. They acquired the distribution rights together with the UK distributor New Wave Films and released the trilogy modestly in about ten cinemas in the UK, with each of the (three) volumes shown for one week; they subsequently released the trilogy exclusively on Mubi (each volume for 30 days); and a wider VoD release and DVD/Blu-ray release followed thereafter. 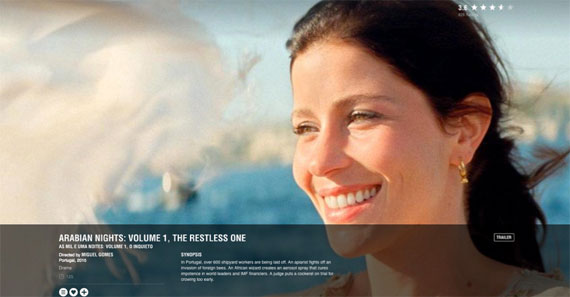 Those films had not been selected for the most prestigious and competitive ‘main competition’ programmes of Cannes and Berlin, but for special programmes such as Un Certain Regard in Cannes and Forum or Panorama in Berlin. Such films are less likely to be picked up by international distributors than the main competition films.

It is precisely the focus on such films which aligns with Mubi’s objective to support films which often struggle to secure international distribution – often because distributors prioritise films with more commercial elements (for example, well-known cast, a reputable director, established co-producers, etc) to be able to recoup their investment.

In the UK market, Mubi supports those films by organising a modest theatrical cinema release and an exclusive release on their platform before opening up wider. This release sequence bears resemblance to how Amazon Studios releases films in the UK market.

Mubi’s expansion to distribution requires substantial financial investment in terms of film acquisition and releasing, but it is clear that those films add aesthetic and promotional values to Mubi’s viewing platform, while the films themselves are introduced to a broader film audience. 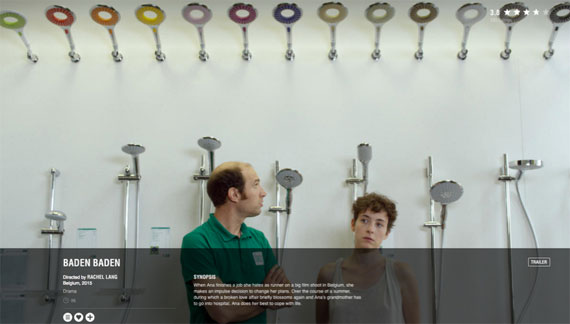 Baden Baden was released in September 2016 in UK cinemas

With the first five films released in UK cinemas and on the Mubi platform, we are about to experience the extent to which Mubi’s release strategies can function as a stepping stone to aftersales in the online market and the physical disc market.

Will global SVoD platform providers such as Netflix be keen to negotiate deals if films have already been shown exclusively on Mubi, and how will that impact on the potential value of an online distribution deal? Do specialist SVoD platform providers take a stance on this matter? Will Mubi seek to establish collaborations with specific platforms to ensure an afterlife for those films?

The answers to such questions are important to the future of Mubi: if their distribution strategy is effective and they are able to support the commercial performance of films on other VoD platforms and in the physical disc market, they will become an attractive promotional platform for the release of new specialist arthouse films in the marketplace.

Roderik Smits is a film researcher and consultant with a strong interest in the film distribution business. He is based at the University of York (UK).

Recensione: My Dad Is a Sausage

Anouk Fortunier • Regista di My Dad Is a Sausage