These are the finding of a new European SVOD report by the European Audiovisual Observatory, part of the Council of Europe in Strasbourg. The report, authored by Gilles Fontaine, Head of the Observatory’s Department for Market Information and Observatory Analyst Christian Grece, is entitled Trends in the EU SVOD market - 2017 Edition It was financed by the DG Connect of the European Commission.

This new report finds that subscription video-on-demand (SVOD) is the driving force behind the growth of the pay on-demand market, with SVOD representing 66% of total 2016 pay on-demand service revenue, compared with only 11% in 2011. 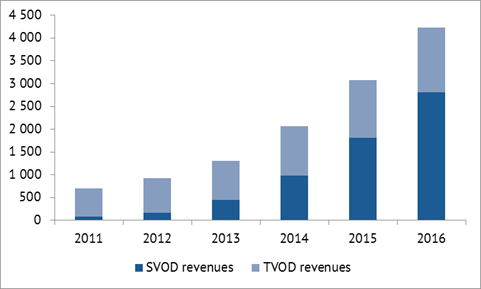 2. SVOD accounts for almost to 20% of all pay-services subscriptions

SVOD still remains a comparatively small market compared to pay-TV. In 2016 It accounted for 18% of all subscriptions to pay-services (linear Pay-TV+ SVOD). This represents considerable growth when compared with only 1% in 2011. In 2016, SVOD represented 6.8% of total revenue of all pay-services compared with 0.2% in 2011. 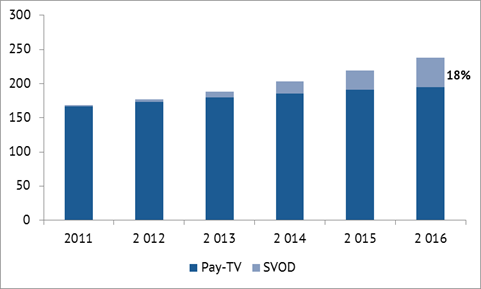 3. The number of SVOD subscribers is growing fast…

Number of subscribers to SVOD in Europe (m) 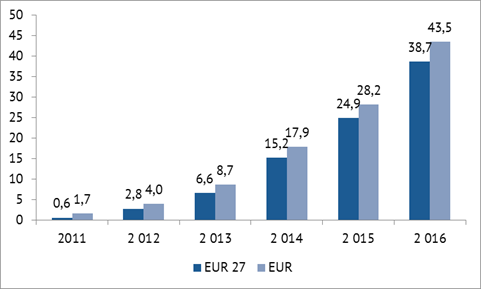 … and so are revenues

Revenues are also increasing sharply. In 2016, the total revenue for SVOD services was estimated at 2.5 bn EUR in EU27 and 2.8 bn EUR in greater Europe. The average annual growth rate of revenue between 2011 and 2016 was 128% for EU 27 and 106% for greater Europe. The top five countries by SVOD revenue were the United Kingdom, Germany, Sweden, Denmark and Norway. Together they accounted for 69% of total SVOD revenue in Europe. 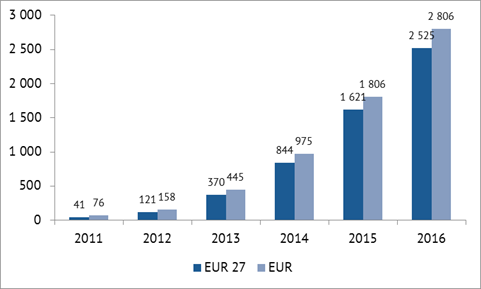 Fantasia si prepara per The Reckoning