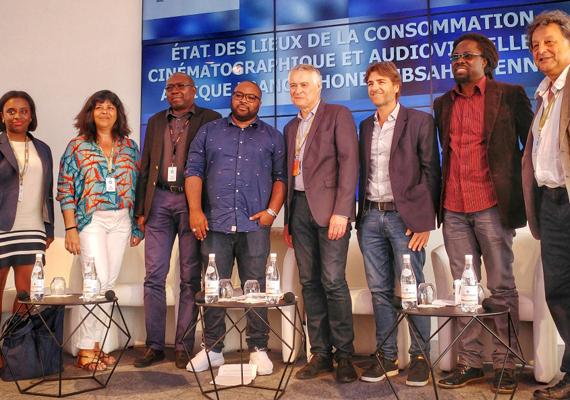 Jean-Christophe Baubiat, head of Research and Distributor Relations for UniFrance and a delegate for French-speaking Africa, was the moderator at a CNC-organised panel held in French on the Gray d'Albion beach, in the beautiful surroundings of the Cannes Film Festival. The main audience consisted of professionals who either come from or work with French-speaking countries in Africa. The focus of the meeting was to strengthen communication between the two continents and, by doing so, build a sustainable and profitable model for the co-production, distribution and consumption of film. The co-moderator of the event was Sébastien Onomo, a Congolese producer better known for the 2016 thriller Le Gang des Antillais [+leggi anche:
trailer
scheda film], directed by Jean-Claude Barny.

Divided into three major sections, the conference started by touching on the topic of the renovation of cinemas and the opening of new multiplexes in French-speaking Africa and Maghreb. Jean-Paul de Vidas, who recently signed a deal with 20th Century Fox for the release of its films in 21 countries in French-speaking North and West Africa, spoke about his ever-growing chain of multiplexes and his experience in distributing the films produced by the major American studios. Despite the poor results that films such as The Fast and The Furious and Wonder Woman might have seen in these territories, de Vidas is confident that, with time, the trend will change, especially looking at Nigeria and its expanding market.

As noted by Aziz Cissé and Coulibaly Diakité, there are several strategies in place to facilitate the renovation of the cinemas and protect the distribution of local production – there are tax incentives on the materials used to build the cinemas, but there are also some rules that oblige the cinema owners to play a specific share of local productions in their theatres over the more famous American blockbusters. This approach is the result of a failed reorganisation of the system when the investors came in, bought the cinemas and had to keep them open for only ten years, after which they simply turned them into shopping centres, thus causing great damage to the local film industry.

The second point discussed was distribution, and it is clear that the territories are so big and diverse that it's hard to make a general plan that can work everywhere. Some multiplexes work fine, but in other cases, it has been noted that travelling cinema can be much more successful for some films that are appropriate for people who are not used to shopping centres or multiplexes, or who may not have the financial means to afford a cinema ticket. While in Europe we have organisations like Eurimages, Creative Europe, MEDIA and local institutions supporting the co-production and distribution of European cinema, countries in French-speaking Africa and Maghreb are still talking about the possibility of launching a similar body that can facilitate communication and collaboration between countries.

The third and final part of the conference was dedicated to the consumption of cinema. The growing smartphone and tablet market and the investments that companies like Orange have made in the past few years have given rise to a new trend in entertainment consumption, opening many doors to key players like Trace TV, a platform distributing urban and African music and cinematic content to over 60 million subscribers in over 160 countries and in nine different languages. Despite the success enjoyed by comedies and action flicks, it is clear that, over and above the genre or an A-list American cast, what works best is the co-production and distribution of stories with characters that people can relate to. The success of the 2017 comedy Bienvenue au Gondwana [+leggi anche:
trailer
scheda film] by Mamane shows how local stories can draw the public into the cinemas, but the low earnings still make the professionals question whether it will be possible to have a sustainable commercial film industry that allows producers to recoup the investments and make enough profit to reinvest it in new productions.

Valery Iordanov in post-produzione con Shakespeare Like a Street Dog