Recensione: It Takes a Family

Rare are the films that you wish were longer. It Takes a Family [+leggi anche:
trailer
intervista: Susanne Kovács
scheda film] by Danish director Susanne Kovács, her 60-minute debut, which has its world premiere in the International Competition at DOK Leipzig, is one of them: a complex, personal story about the director's family that opens a multitude of questions about identity and the transfer of war trauma through generations.

Kovács starts the film with the story of her grandmother Eva, a Hungarian Jew who survived Mauthausen. She interviews the visibly ill grandma to mixed effect: the old lady is at times open and at other times dismissive, saying that Susanne can't film the impact of the horrors of concentration camps, because it is inside her. This is the film's starting point: is that really the case? Is this impact not felt throughout the family, in her father, who was born in Denmark and later married a German woman, whose own father was a German soldier during the Second World War? Does this not affect Susanne's life, and by extension, the life of her own children?

Eva was the daughter of a very wealthy Budapest merchant — they vacationed in Venice, as old photos show. And then, all of a sudden, she was a prisoner. After the war, she married another Hungarian, they moved to Denmark and decided not only to hide, but also to repress their Jewishness, scared that it could land them in trouble again.

Susanne's father Peter, the other most important protagonist of the film, was born in Denmark and fell in love with a German woman. It was 1974, the post-hippie era in which people strongly believed love was the most important thing and that the rest simply didn't matter. How wrong they were: Peter's father was shocked when Peter’s wife got pregnant, and demanded her to either abort or have the child in Denmark and keep living there.

Perhaps the most painful part of the film comes from the interviews with Peter, who was terribly abused by his father, a treatment in which Eva apparently was rather complicit. When asked by his daughter Susanne if he does not think this had something to do with his parents' past, he replies that it is impossible to know, and that terrible people and good people exist regardless of the war.

That is certainly true, yet the director almost attacks her father when she mentions that he once sent her to stay with his abusers when she was a child — only for two weeks, but still. Moreover, Eva herself is very annoyed by Susanne’s constant questions. This approach feels rare — though the documentary possesses an undeniable warmth, showing that there has definitely been love inside this family, it is also rough-edged and confrontational. Above all, it is immensely brave, as Susanne dares to ask her parents about their old scars then to project it all on the big screen.

There was no such thing as PTSD in the period after the Second World War. People would say, it is the past, let's forget it and move on with our lives. Today, we know better: we are aware that repressing issues is dangerous, and that scars are transferred from generation to generation. This nevertheless remains an under-explored phenomena and, in that sense, It Takes a Family is also a wake-up call to families and societies.

Kovács was lucky to have a wealth of old photographs and home recordings at her disposal, used generously and excellently edited together by Marion Tuor (Heartbound [+leggi anche:
trailer
scheda film]) in the film, dynamically interspersed between often heartbreaking interviews with the family. All of this is supported by Kovács’ own perfectly measured voice-over.

It Takes a Family was produced by Copenhagen Film Company Short & Doc.

altro su: It Takes a Family

Recensione: It Takes a Family

Recensione: Tales From The Prison Cell 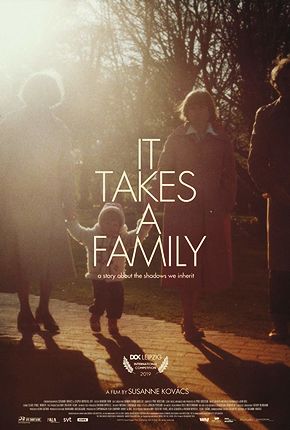