In Endless Night [+leggi anche:
recensione
trailer
making of
intervista: Isabel Coixet
scheda film], Isabel Coixet warned us that when the light fades away in the Arctic, it’s not only shadows that loom, but also our most deeply buried truths. The Head, a series directed by Jorge Dorado (Mindscape [+leggi anche:
recensione
trailer
intervista: Jorge Dorado
scheda film]) from a screenplay penned by brothers Álex and David Pastor (who released their film The Occupant [+leggi anche:
trailer
intervista: David e Álex Pastor
scheda film] on Netflix a short while ago), uses equally snowy and icy settings, but on the opposite side of the globe, to build up a six-episode show, with dialogue mainly in English (there is only one Spanish character, the cook played by Álvaro Morte), which is effective because it hinges on mystery, horror and isolation.

For those of us who have suffered the same thing at first hand lately – being shut up in our homes for months, thanks to the bloody pandemic – The Head provides some consolation, because one comes to realise that there are people who could easily have had a much worse time of it than us. Also because, right from the first episode, the series, which attempts – but fails – to give off a whiff of a scientific B-movie, cracks jokes about its resemblance to The Thing, John Carpenter’s 1982 film that made so many people suspicious of dogs with no owners. This manages to raise a sympathetic smile in the viewer, who will be fed up of often having to search for carefully hidden references and homages in audiovisual works that are produced with a clear mainstream calling.

Shot on a 2,000 m2 set on the Canary Island of Tenerife, after some painstaking work on the scenery and the digital effects, and with exteriors filmed in Iceland, The Head begins at an upbeat party intended to bid farewell to some of the workers from the polar research station who are going back to their home countries – as luck would have it, on the last day of sunlight. Among them is commander Johan Berg (played by Denmark’s Alexandre Willaume), whose wife Anikka (his fellow countrywoman Laura Bach) will be staying on to work in this remote tundra during the dark winter months to come. When the sun starts shining there once again, Berg returns to the science base, concerned because he hasn’t heard anything from his wife in days. What he encounters is a fine and jolly nosegay of unequivocal signs of violence, various corpses and one of the members of the team – doctor Maggie (Scottish actress Katharine O’Donnelly) – in a disastrous state both emotionally and mentally, as she can’t recollect what happened. The time has come to investigate.

And thus begins – once the girl starts talking (although we don’t know if she’s telling the truth, of course) – the process of piecing together what happened to this team of ten human beings isolated in the Antarctic during the months of darkness, with the help of constant flashbacks. By intertwining past and present, plus the protagonists’ memories of marital bliss (which occasionally prove a tad mawkish), the structure of the first few episodes of this series is gradually built up. The show, which is sure to be popular in Asian countries where Spanish thrillers such as The Invisible Guest [+leggi anche:
trailer
scheda film] have been huge hits, not only brings to mind the aforementioned film by Carpenter, but also The Shining and Alien, for example… But it makes no difference, because in millennial space, no one can hear last century’s films scream.

The Head is a production by Mediapro Studio in conjunction with Hulu Japan and HBO Asia, and it is available on Orange TV. 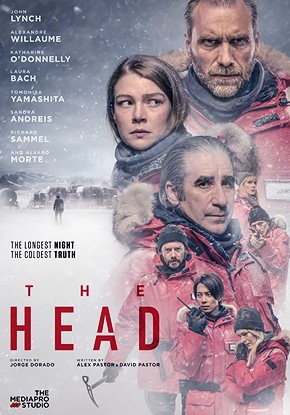