Recensione serie: I May Destroy You

Michaela Coel in I May Destroy You

I May Destroy You is the best television show so far this year. Yes, you read that right – and that’s in a year that has seen audiences spend inordinate amounts of time stuck in front of their sets in lockdown, celebrating Normal People, The Last Dance and Tiger King! Set in London, the UK-US collaboration between the BBC and HBO consists of 12 half-hour episodes dealing with thorny, grey areas about consent, the black experience and grief. Michaela Coel – remember that name – writes, directs and stars, and does each job to such a high standard that calling her a present-day Orson Welles wouldn't seem so far-fetched.

So, what makes I May Destroy You so good? Firstly, it is about one of the more pressing topics of the day: the creation of safe spaces where men and women of all genders, ethnicity and beliefs can operate freely. It delves into this almost taboo subject by highlighting how such spaces are hard to find in modern-day London, an apparent Mecca of liberty, freedom and fun. It kicks off by highlighting a crime that happens far more regularly than anyone cares to think about: an alcoholic beverage being spiked with a date-rape drug before a sexual assault takes place. Unfortunately, Coel is writing from experience. In 2016, while she was working on the second series of her breakout show Chewing Gum, she was attacked and assaulted. Here, she reaches into that painful experience and produces an extraordinary look at the morality of sexual relationships in the age of social-media apps facilitating hook-ups, camera phones, one-night stands, and a multitude of sexual and gender identities. It captures the London dating scene truthfully, but brutally, as well as a whole new morality around sexual interactions, good and bad. There is even a clever paralleling of a more patriarchal or traditional set-up of relationships in Italy, which contrasts with the bright lights of London. It manages this while remaining entertaining and unnervingly familiar, but what is most potent is that it also elucidates and perhaps educates on what is lawful or not in these ever-changing times. As the story develops, there are some welcome discussions on how an activity that seems innocent to one person can be devastating and hurtful to another.

That's an awful lot to pack into one series, but Coel makes the narrative aspect seem easy. She also creates several beguiling characters with intricate plots and their own personal demons to overcome. First up, there is Arabella, played by Coel, who is coming off a well-received debut book and is now trying to navigate that problematic “second-album syndrome”. She likes to party, which gets in the way of the work ethic that her agents and publishers expect of her. Her circle of friends includes Terry (Weruche Opia), an actress with self-esteem issues that make her flop all her auditions, and Kwame, a gay man who also gets assaulted but whose suffering is met with indifference. As the series develops, his story gets increasingly complex, leading to one hook-up that is sure to be debated. Around this trio are a collection of supporting characters, each with their own immediately recognisable idiosyncrasies. Even as we become engrossed in the sitcom aspect of these characters' lives, the date-rape crime is a constant rain cloud, waiting to pour.

I May Destroy You was produced by the BBC, HBO and Falkna Productions.

altro su: I May Destroy You 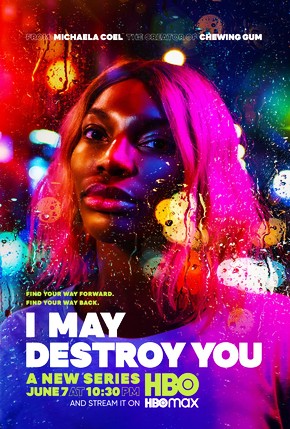