Recent films about the church or priests released in Poland explored dark secrets and deeds of the cloth – abuse, paedophilia or greed. Clergy [+leggi anche:
recensione
trailer
intervista: Wojciech Smarzowski
scheda film] by Wojciech Smarzowski and Don’t Tell Anyone by Tomasz Sekielski and Marek Sekielski gathered record-breaking audiences, which comes as little surprise since evil has always been more alluring than good. Aleksandra Potoczek’s documentary xABo: Father Boniecki [+leggi anche:
trailer
intervista: Aleksandra Potoczek
intervista: Timo Malmi e Milja Mikkola
scheda film], about one of the most beloved and open-minded of Polish priests, may not get such nationwide attention, despite coming out in theatres after a successful premiere at the Krakow Film Festival.

That is too bad, as moments spent with xABo – priest Adam Boniecki (x standing for the Polish word “ksiądz” - “priest”) – are precious and worthy, even for atheists. Father Boniecki doesn’t judge and doesn’t look down on his flock; rather, he is full of empathy and understanding, even for groups condemned by the church such as suicidal people and members of the LGBT community. His openness brought a gag order against him – he is not allowed to talk to journalists or to publish anything outside of the catholic weekly Tygodnik Powszechny, where he now serves as editor emeritus, after heading the magazine for decades.

Potoczek follows the priest as he travels around Poland to meet with all kinds of crowds, readers of the book he published, people seeking advice on how to live or his collaborators. He takes the time to talk to anyone who needs it or to take a selfie with those who ask for one, even if they interrupt his lunch at McDonald’s. He is modern in all kinds of ways, very active and bright, and addressing important issues such as loneliness, a more vicious plague than COVID-19. Father Boniecki also shares his views on priest celibacy, how it freezes some of the emotional needs of priests and makes certain men of cloth unable to connect to other people in a deep way. The film gives unparalleled insight into the heart and mind of a clergyman who must stay open to other people’s suffering and be ready to bring solace, comfort and guidance, but is at the same time infinitely lonely, his thoughts and his faith being his closest company.

In Polish, one of the synonyms for the word “priest” is “duszpasterz”, which literally means “shepherd of souls”. This is an excellent description of that father Boniecki is dedicating his entire life to – he is leading his flock, but also trying to help them find nourishment for their souls. He believes in human contact, not empty ritual, and says that you can talk to God everywhere. This quiet, modest documentary resembles a sermon, one that everyone can listen to and a mass that all are welcome to attend.

xABo: Father Boniecki was produced by Aleksander Kardyś through the Tygodnik Powszechny Foundation. Polish private broadcaster TVN and the Krakow Festival Office were co-producers, while Gutek Film is releasing the film domestically. 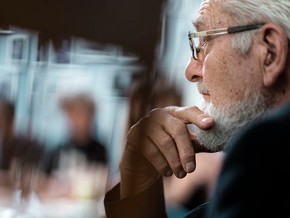