Recensione: Once upon a Time in Poland

The Catholic religion and daily life in many Polish cities and homes are joined at the hip. The Sunday Mass and the sermons influence what people say or think, or even how they vote. Radio Maryja, owned by Father Rydzyk, is one of the most popular radio stations and a guiding light for many. Given this close relationship with religion, it’s difficult for Polish directors to look at the topic from a broad perspective or with any distance.

Enter the Czechs. In the opening credits of Once Upon a Time in Poland [+leggi anche:
trailer
scheda film], which had its world premiere in Warsaw during the 17th Millennium Docs Against Gravity Film Festival, directors Vít Klusák and Filip Remunda (Czech Dream) say that their nation is the most atheistic one in Europe, while their neighbours – the Poles – are the most Catholic ones. But the duo of helmers don’t simply cross the border and shoot; they follow another film crew led by the loveable and fairly clumsy Karel (the original title of the film was Jak Buh hledal Karla, or How God Looked for Karel). His small crew consists of a DoP, sound engineer and Polish-Czech interpreter.

Fuelled by curiosity, directness and a lot of guts, they go to Polish churches, big religious events, pilgrimages andthe theatre that staged Oliver Frljić’s play Course, which was considered to be blasphemy and incited violent protests. They even visit the home of an ultra-religious mother of two. Karel is seemingly the one most invested in this mission to find a connection with God, as he also feels lonely after being left by his wife. His crew constantly share their views, and watching the group dynamics is fun and guilt-free, as opposed to watching some of the scenes that involve priests or their flock.

As the film unspools, it becomes clear that Catholics and atheists, or maybe even the Poles and the Czechs – at least as portrayed by Klusák and Remunda – are very different when it comes to confronting complex or challenging topics. The Czechs are direct and are not afraid to ask questions, while the Poles prefer to avoid them and stick to clichés heard in church or taught to them in school by men of the cloth. There are exceptions, too: Karel and his team also meet “good” (so to speak) priests who prove that religion can be an important, spiritual pillar in one’s life.

However, Once upon a Time in Poland is not just satire; it also shows how religion influences the social and political scene in Poland, and proves that the local church has a lot on its conscience. The directors also point out a paradox: one of the most important Catholic rituals is the confession of one’s sins and repentance, yet the Polish clergy would rather remain silent or turn a blind eye. This film probably won’t change a thing, but it can make people laugh, which always proves helpful in hopeless situations.

Once upon a Time in Poland is a Czech-Slovak-Polish co-production staged by Jana Brožková and Zdenek Holy/Vernes sro, and co-produced by Hypermarket Film, Czech Television, Plesnar & Krauss Films, Krakow Festival Office and Peter Kerekes. The City Cultural Centre in Bydgoszcz was a partner on the film. The world sales rights are up for grabs.

altro su: Once Upon a Time in Poland

Recensione: Once upon a Time in Poland 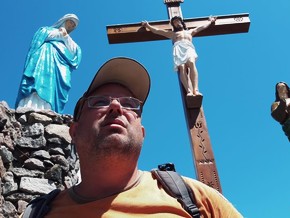