The Latvian grotesque comedy What Silent Gerda Knows was one of the world premieres presented in the main competition strand of this year’s Riga International Film Festival. The film, directed by Daugavpils-born veteran Yevgeny Pashkevich, follows his drama Gulf Stream Under the Iceberg, released in 2012 and the winner of the Awards for Best Film, Best Director and Best Production Design at the national Lielais Kristaps film awards.

The story of What Silent Gerda Knows, penned by the director himself, is set in the present day in a boarding house at the Vietinghoff Palace, located in the Latvian countryside. Here, some wealthy guests decide to voluntarily abandon all of their means of digital communication (such as phones and computers) and to experience a sojourn that is loosely inspired by the lifestyle of rural 1930s Latvia. The reserve is a good place to disappear, at least for a while, and to become inaccessible to the outside world. It’s summer, and a strange heat wave seems to gradually drive the guests to madness.

In his director’s statement, Pashkevich says, “Many things that we do not express in words or deeds manifest themselves in our fantasies, and paradoxically enough, they reflect our true self more vividly than the daily routine.” And the film is about precisely this very subject, as it is mostly dominated by unconventional writing, disruption and crossovers between the dream world and reality, and perhaps a general will to leave viewers puzzled while they accompany the characters on their path to madness. This mission is accomplished overall, albeit not fully; the variety of personalities and dynamics depicted here can surely deliver a unique cinematic experience, where the grotesque, romance, drama and comedy all cohabit, but this mix of genres doesn’t always work properly, making some scenes far less captivating than others and thus detracting viewers’ attention. The great effort to present a film featuring unconventional writing and direction must certainly be acknowledged, especially within the context of a small industry such as Latvia’s; however, it is important to highlight that a less chaotic dramaturgy would have been beneficial and helped to maintain a better balance between the wish to experiment, a good narrative pace and the piece’s general intelligibility.

Aesthetically speaking, the cinematography is well crafted and visually astonishing: the dreamlike sequences in particular, and especially the one of Kellerman’s first nightmare (courtesy of the talented Andrejs Rudzāts), are a feast for the eyes and vaguely echo the atmospheres of a certain Federico Fellini’s films, such as Juliet of the Spirits (1965).

One artistic choice in particular could be debatable, though. It is difficult to understand why Pashkevich decided to cast a Russian veteran such as Leonid Yarmolnik to play Fittinghoff, one of the myriad guests. While he may possess the right physique du rôle, his character is a German man who speaks English, and the director ultimately chooses to dub him. Aside from this, the actors’ performances are enjoyable and entertaining, in particular the ones by Severija Janusauskaite, Leonardas Pobedonoscevas and Gundars Āboliņš.

What Silent Gerda Knows is a Latvian production staged by the director himself for Nida Filma and co-produced by Roberts Vinovskis for Studio Locomotive. The feature also received backing from the National Film Centre of Latvia, the country’s film agency. 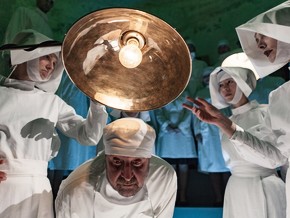 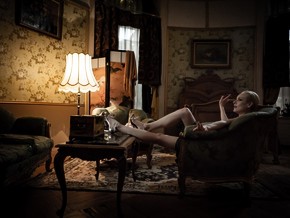 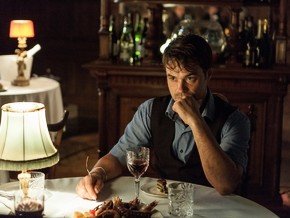