Alec Secareanu in The Bike Thief

It's a film with a lot of heart that's at pains to show the plight of Eastern Europeans in a society that looks upon them sceptically, even in a place as culturally diverse as London, where most of the people the man meets are of mixed heritage themselves. That fact, however, doesn't stop them looking at the Romanian, known only as The Rider, as a potential threat to their financial well-being, especially as he seems to be a speed demon when it comes to getting people's pies in front of their television sets. The Rider is portrayed with panache by Alec Secareanu who made a name for himself starring as an immigrant food picker in God's Own Country [+leggi anche:
recensione
trailer
intervista: Francis Lee
scheda film], and here he seems to sweat every sorrow that life has to offer.

Chambers starts the film by showing us The Rider’s life. His marriage to cleaner Elena (4 Months, 3 Weeks And 2 Days [+leggi anche:
recensione
trailer
intervista: Cristian Mungiu
intervista: Oleg Mutu
scheda film]' Anamaria Marinca) is good, but they struggle to make ends meet with a teenager daughter (Alexia Maria Proca) and a young baby to feed. They live on a council estate where the kids smash cars for fun. The Rider is constantly worried that something terrible is going to happen, and hardship follows him around like a rain cloud in a cartoon. When his bike goes missing, it soon becomes apparent that it will result in him getting in debt, losing his job and his home. As such, he's faced with the decision to do or die, and the film subversively asks us whether two wrongs can make a right. Would we be as fond or The Rider if he was forced to do a criminal act out of necessity? Where do his and the audience's moral compasses lie? Do they match up?

Recensione: Bellum – The Daemon of War 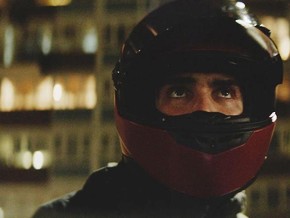 Recensione: Bellum – The Daemon of War

Recensione: The End of Suffering (A Proposal)