Shown in the Thessaloniki International Film Festival's Meet the Neighbors competition, Dimitris Koutsiabasakos' Daniel '16 starts with some proper sulking after the titular teenager (Nikolas Kisker) is forced to leave Germany for a juvenile offender community in Greece. Daniel is not happy with this arrangement, to say the least, and even less so after he gets soaking wet within minutes and his demands to talk to his mother, repeated over and over again, are promptly ignored.

But it's not just his attitude that's the problem – the whole place feels way off, with just one more boy running around and a bickering couple trying to save their failing business and marriage. Faced with such a reality and secrets that nobody even bothers to hide properly, it’s no wonder Daniel starts to wander around the village aimlessly, desperate for any kind of distraction, and during one of his boring outings, he meets Syrian refugees: a father and son, hiding in a house he had considered abandoned.

There is something interesting about Daniel, a towering bulk of barely concealed frustration, but the simple story – apparently based on real events – feels familiar, and it needs to be said that the acting is certainly uneven, which is hardly surprising given Koutsiabasakos' insistence on working with young non-professionals. Its sudden sweetness, as Daniel slowly comes out of his shell while learning to care for somebody else, also doesn't fully convince, although it certainly makes for an easier watch as yet another grey-hued social critique makes way for some heart.

Sure, his change is not exactly that sudden – soon enough, Daniel is revealed to care deeply for his beloved dog, left in Germany with his mother, who couldn't care less. And a bunch of emus that he finds in Greece, said to be able to kill a lion with one kick and named after football stars. But what Dimitris Koutsiabasakos does best is conveying the sense of solitude, as everyone here is as lonely as it gets – from a kid forced to serve his “sentence” in the middle of nowhere to a woman in the midst of an affair that's just bound to end badly. If people are so indifferent to each other, he shows, it's only fitting that they would be indifferent to strangers as well, even ones crossing the borders in order to survive or at least provide something better for their children. And yet in a world that's barely hanging by a thread – or an emu's feather – there is clearly a chance for kindness, too, this time coming from someone who also knows how it feels not to be wanted.

Daniel '16 was produced by Greece’s View Master Films, and co-produced by the Greek Film Centre and ERT. 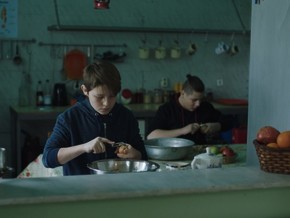 I Rendez-Vous With French Cinema volano a New-York