We are all deeply submerged in this nightmare that began around one year ago: our attitude to it sometimes consists of averting our eyes so as to avoid living with the continuous anguish of pain, loss and illness, especially if it hasn’t (yet) directly affected our loved ones, and thus we attempt to escape this grim reality through reading, cinema or music. Perhaps that’s why it’s hard to commit to watching a documentary mini-series such as Vitals, in which the director, Félix Colomer, has not only opted to recall how catastrophic this disaster has been, but has also, through his protagonists, been able to reveal the more luminous, optimistic and joyful side of it (such as the song that bookends it).

This is because the coronavirus, from a positive standpoint (and let’s assume there is one…), has served to strengthen friendships, heighten solidarity and remind us of the most valuable things in life. Much like Lucas Figueroa and his film Renaceres [+leggi anche:
recensione
trailer
intervista: Lucas Figueroa
scheda film], who took advantage of the empty streets of Madrid, once the lockdown had started, to call for the reinvention of the human race in the wake of a traumatic experience like this, Colomer – who barely shows us any of the deserted streets in his work, although they are there – focuses his lens on the people suffering from the illness and, above all, those who fight stoically and with all their might against its relentless onslaught (while faithfully depicting both their professional and personal lives).

Vitals thus turns into an audiovisual round of applause for those brave healthcare workers who put their well-being and that of their loved ones on the line in order to hold the fort and tend to the COVID sufferers, caring for them, keeping them company and keeping their spirits up. It’s split into three parts, each lasting 50 minutes – entitled Caos (lit. “Chaos”), Esperanza (“Hope”) and Vida (“Life”) – and was shot between March and June 2020 in Sabadell (Barcelona) and, more than anywhere else, in the rooms, operating theatres and corridors of the Parc Taulí hospital. Its ensemble cast is made up of individuals such as Noemí (a nursing assistant), Vanessa (a 34-year-old patient), Josep (an 80-year-old COVID sufferer), Silvia (a nurse), Eduard (a 57-year-old man who has contracted the virus) and many more (including their families, who support them all the way). As one of them says, “If you don’t experience this yourself, you don’t know what it’s really like.”

However, Vitals reflects on and raises awareness of this experience: it commemorates those victims who died alone and who were not able to say goodbye or have a decent farewell; it highlights the insane workload in the hospitals, the effect of this – physical and emotional – stress on the private life of each professional, and the exhaustion, fear and anguish that envelop everything, as if this were also some kind of psychological virus.

And, as suggested by the title, it digs into the life-affirming side of this horrific experience. After all, in situations like this, a rock-hard bond is forged between patients and healthcare workers (in addition to an unwavering friendship between patients sharing the same room), families and friends provide an outpouring of love for their hospitalised and self-isolating relatives (this support has been able to reach its intended recipients thanks to modern technology), a sense of camaraderie has been established among colleagues, and above all (on many occasions, thankfully), people end up surviving this awful virus (with the help of the unsinkable optimism of the nurses and of the patients themselves).

Vitals – which took part in the Docs Barcelona 2020 Industry Program (see the news) – is a production by Forest Film Studio and El Terrat (The Mediapro Studio) for HBO Europe, which aired it in 21 countries on Sunday 7 February. 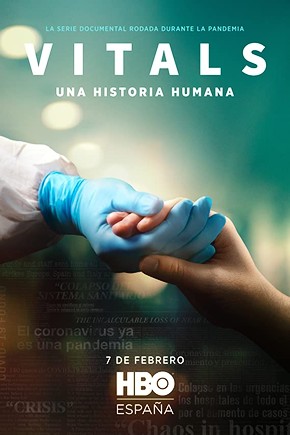