In the cult Spanish flick Rapture, it was film that swallowed up the protagonists – and in the case of Los resucitados, a movie shot in the late 1990s, with minimal resources but lashings of enthusiasm, something similar happened. Its director, Arturo de Bobadilla, took almost 20 years to cobble it together and premiere it – just as Rapture’s Iván Zulueta himself might have done, given that he was a filmmaker who was never happy with the results of his editing. That shoot, its post-production and the resulting movie is the focus of Mi adorado Monster [+leggi anche:
trailer
intervista: Víctor Matellano
scheda film], the latest documentary by Víctor Matellano, a lover of the Spanish fantaterror genre, as demonstrated by his fiction films Wax [+leggi anche:
trailer
scheda film], Vampyres and Stop Over in Hell, as well as his non-fiction flick Clawing! A Journey Through the Spanish Horror. His new outing lands in Spanish cinemas today, distributed by 39 Escalones Cine.

“It’s a pity I wasn’t involved in that shoot,” an envious Macarena Gómez admits to the camera as she watches Los resucitados. Hers is a familiar face in modern horror films, as proven by her performances in movies of the likes of Shrew’s Nest [+leggi anche:
recensione
trailer
intervista: Esteban Roel e Juanfer And…
scheda film], and she, together with some of her high-profile buddies such as Alaska, Carlos Areces and Cristina Alcázar (who gave a turn in The Passenger [+leggi anche:
trailer
intervista: Raúl Cerezo e Fernando Gon…
scheda film], screened recently at Sitges), forms part of the bunch of stars invited to talk about their participation in the aforementioned feature, or to impart their impressions as they watch it. Doing likewise are producer Enrique López Lavigne, the co-screenwriter of Mi adorado Monster and actor Manuel Tallafé, Santiago Segura (who appeared in the movie at a time when he was not yet that well known among the general public, even though he had already won awards for his short films and was starring in The Day of the Beast) and, naturally, the great Álex de la Iglesia, who engages in a “matey” chat with Arturo de Bobadilla.

However, as mentioned in the opening paragraph, the monster that we all have inside of us comes alive and reveals itself to Bobadilla, following him around in the street, and forcing him to reflect on his life and his body of work. It is here, in these conversations between two mind-boggling people, where the film delves into the personality and the dreams of the “Spanish Ed Wood”, as Segura rightly christens him in one of his interviews. But this feature never veers into overly intense territory; rather, by blending together humour and absurdity, it ends up being a life-affirming tragicomedy that, first and foremost, portrays how an unbridled love for cinema can take over and suck someone dry.

Of course, Mi adorado Monster is neither a serious nor a highbrow documentary, but rather a slice of pure entertainment that elicited applause at the 32nd San Sebastián Horror and Fantasy Film Festival, a gathering where devotion to horror and a party atmosphere reign supreme. And this all oozes out of this film, in which comedian Millán Salcedo breathes life into the most famous Spanish film critic of them all: the one who, lacking even a modicum of a sense of humour, simply abhors all movies that happen to deviate from the classical, most orthodox narrative (and production) templates.

Mi adorado Monster is an El Estudio production in conjunction with Infilmity and ViMa, with the involvement of EMB Documental.

Recensione: The Killing of a Journalist 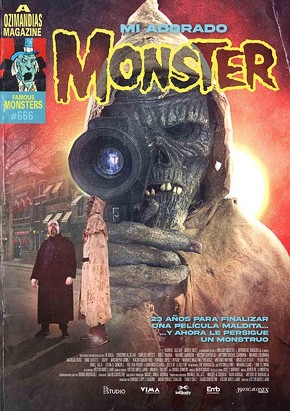