Luke McManus’s new documentary North Circular joins a wave of recent films letting their chosen locale dictate their very structure. Eight individual locations on an important thoroughfare on Dublin’s Northside provide the eight chapters of his film, just as Gianfranco Rosi and Alice Diop, in Sacro GRA [+leggi anche:
recensione
trailer
intervista: Gianfranco Rosi
scheda film] and We [+leggi anche:
recensione
trailer
intervista: Alice Diop
scheda film], respectively, ceded a sense of authorial control to follow exact transport routes in their chosen cities. In devising his film this way, McManus is able to reap pertinent insights about Dublin past and present, as well as Irish history more broadly, but he is also at risk of over-generalising and letting his themes get detached from the physical space generating them. After winning a Special Mention at the Dublin International Film Festival, it has now enjoyed its international premiere at Sheffield DocFest.

What’s more, North Circular is a musical, although surely one of the most sombre and chilly works ever staged in that genre. Accompanying each expositional portion are traditional folk ballads mainly sung a cappella by famed local musicians, whose lyrics chime with the memories and accounts we’ve just heard. They’re captured diegetically in a pub, bathed artfully in narrow sheets of Rembrandtesque lighting; with the black-and-white, digital cinematography, these moments feel like a funeral wake following the articulate eulogies of the voice-over-driven main sections.

In the film’s first half, McManus is explicitly concerned with the road’s less flattering historical legacies. Offering an omniscient voice-over, which he then cedes to the main protagonist of that section, he alights on an elderly Irish army “piper” (a bagpipe player), who feels like the last link to Ireland’s military adventures overseas, when it was incorporated into the wider British army and sent its men to suffer at Gallipoli and the Somme in World War I. Then we have a sobering glimpse of an asylum whose inmates ended up constituting the settler population in Van Dieman’s Land (the 19th-century colonial name for Tasmania); mainly destitute women, their cause for incarceration were “offences” like stealing a ribbon or a piece of thread. Wreathed around McManus’s call to acknowledge Irish history (especially as the area falls victim to gentrification) is a palpable sense of shame about the fact that the road, which is not far from where he lives, conjures these particular ghosts and reminders.

Helped towards its overall conclusion by pictorial interludes – sequences of swaying tree branches in the sleet, or blackbirds circling a construction crane, all captured in punch-drunk slow motion – the film loses its footing somewhat as it attempts to end on a positive note. A climactic victory parade for Kellie Anne Harrington, the Irish Olympic gold medallist for women’s boxing, doesn’t quite provide the answer or synthesis to the earlier questions the film is posing, and the viewer could become a bit puzzled as to whether the road is more significant to McManus as a specific geographical marker, or a symbol intended to trigger various associations about the country more broadly.

North Circular is an Irish production staged by Madhouse Films. Its world sales have been entrusted to Lightdox.

Recensione: Paying a Visit to Fortuna 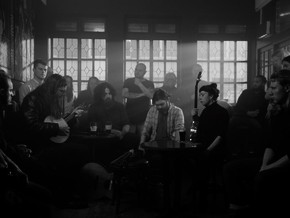 Recensione: Paying a Visit to Fortuna