What if legendary musical director Jacques Demy and current pop sensation Angèle were to make a series together? It’s historically impossible, but we’re keen to bet those two names were the first ones dropped during brainstorming sessions for French musical series ReuSSS, which was presented earlier this year at the Séries Mania and Série Series festivals.

Told in ten rather short (17 to 20 minutes) yet catchy episodes, the story follows three teenage friends (the title word “reuSSS” is French slang for “sistah”) as they leave high school behind them and reconcile their fears and aspirations with reality. There’s Hanane (newcomer Inès Ouchaaou), the chatty bookworm who dreams of escaping the suburban neighbourhood she lives in; Ambre (Charlie Loiselier, seen in the French version of Skam) who has won a place in a ballet school but is starting to lean towards hip hop; and Maïssa (Assa Sylla, another Skam alumnus), whose depressive mother puts her in charge of the house, leaving her no time to deal with the love triangle which she’s at the centre of. Oh, and Hanane’s older brother seems to have caused trouble within a neighbourhood gang and it somehow falls upon our trio’s shoulders to “pull a Veronica Mars” and investigate the whole thing.

And yes, they sing! They mostly hit the mark, too, which feels like an accomplishment in itself, given how dismissive viewers can be of the musical genre (just one random song and half your audience might feel alienated). The film’s original songs were produced by French rapper Brav and range from your typical spleeny ballad to more current hip hop vibes. And whilst the former are a bit hit-and-miss, the latter easily evoke the joy associated with francophone musical sensations like Stromae, Angèle and Orelsan. Ambre’s musical numbers in particular feel like instant hits, even more so given her cliché but super-catchy ballerina-gone-urban storyline. Series creators Jérôme Larcher (who ran TV shows such as La Cour des grands and Tropiques Criminels) and Catherine Regula also made the smart choice to limit the number of musical numbers in each episode, providing us with the time we need to take in and appreciate these new tunes they’re introducing us to. To put it bluntly, ReuSSS is the exact opposite of the Glee jukebox approach to the musical genre.

However, despite its ambitious and colourful punchiness, the show’s audience is likely to be limited to young teenagers. Interestingly, this isn’t due to the songs, but rather the sketchy main storyline about the girls investigating Hanane’s brother’s gang. The format of the series is probably whimsical enough to allow us to buy into this idea of a teenage Sherlock Holmes set-up, but there’s something off-kilter about the construction of the narrative. It’s probably due to the simple fact that we’re watching three teenagers happily playing detective in a dangerous criminal environment. Unless you grew up watching endless reruns of The Famous Five, this just doesn’t seem plausible, even less so when the gangsters start singing! But despite its insistence on playing “Scooby-Doo in the suburbs”, ReuSSS sounds fresh and looks dashing to boot.

ReuSSS is produced by Lizland Films, created by Jérôme Larcher and Catherine Regula, written by Jérôme Larcher, Estelle Koenig, Salif Cisse, Joël N’sita and Thomas Ducastel, directed by Mohamed Chabane and Théo Jourdain, and is due to air soon via France.tv Slash.

60 serie in vetrina a Series Mania 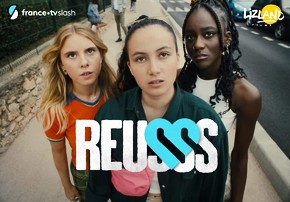 Recensione: Much Ado About Dying

Recensione: The Man Without Guilt

Recensione: Theo: A Conversation with Honesty